You may think to yourself, “Andrew, how could you let that happen? You left the first/second fattest country on the planet relatively healthy, and you’ll return fatter?” 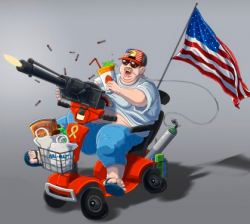 My life as a US-American

But hold your judgement, because you (probably) haven’t lived in Germany for 8 months and experienced the joy of European chocolate.

High fructose corn syrup? It doesn’t really have a place in the EU.

…houses are constructed from blocks of Ritter Sport and then plastered with real cream. The roads are paved with Ferrero’s Nutella, and the Siegfried Line is really just Nordrhein-Westfalen’s over-sized chocolate reserve , constructed of giant blocks of Toblerone and disguised as pre-war tank traps.

In the words of a former exchange student,

The chocolate that is given out as shitty rations in the US is a disgrace against the human race and every animal that inhabits our planet.  Hershey’s can be described as a rancid acid with too much sugar and the same well portioned ingredients as most Americans’ diets.

I embrace this perspective with my whole stomach, vulgarity and all. For those of you on the behind GMT side of the Atlantic: you don’t know what you’re missing.

This is the first time in my life where I’ve become conscious about my candy intake and legitimately concerned about its unfortunate side effects. Exaggeration aside, I’ve probably consumed more candy and other sweets during my exchange year than I have in the last 4 years combined. I’ve maintained a constant 58-60 kilos throughout the year, so the reality is that my weight is probably fine…though I still have 3 months remaining…