Admittedly, I did too, for a little while at least. Suddenly I was living somewhere where I could purchase goods and services with an assortment of only a few coins. It is quite commonplace for an exchange to be done entirely with these little pieces of alloy. Really unique, seeing such “high” coin denominations used for transactions. Over in the United States, few people see anything over a Quarter (25¢ for the non-US-Americans) in everyday life. United States Half Dollars exist, and though they have been produced since 1794, I have yet to see one. I haven’t come across a Sacagawea dollar in a few years either.

One disadvantage of the higher coin denominations, which can be avoided by simple counting, comes in the form of a ‘buyer beware’: If you’re a US-American, and you aren’t paying close attention, it is easy to blow through 5 coins and only later realize that it was between $12 to $13 US Dollars.

Not only is it unique to so frequently use coins, but it is practical as well. A small purchase can be done with the awesome €2 coin. Heck, €0.50 and €1 coins are also great. These coins saved me from my initial frustration with the physical sizes of Euro paper money. I’ll get to that in a moment.

I spent the first few days in Pinneburg learning the coin lineup. The €0.01, €0.02, and €0.05 pieces all look like pennies, with the two lesser denominations being smaller in size than a US penny.

Right. I quietly thought to myself, then why not just use two of the euro-penny-things? Surely there’s some extra cost in manufacturing and shipping the two cent coin…  Just like penny production in the United States, the European Commission is operating at a heavy loss in manufacturing them. But I won’t question it too much. Finland and the Netherlands understand me, though. 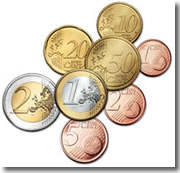 Fast forward a few months. I’m still carrying around my US wallet, and since carrying a metric ton of coin is not too commonplace across the pond, my wallet has no coin pocket. My right back pocket or left breast jacket pocket have become a miniature replica of the Staatliche Münzen Baden-Württemberg (a coin mint in Germany). I’m honestly considering sewing Levi-like red labels to my pant bottoms which read, “Kleingeld Automat” or “Europäische Zentralbank Hosentasche Münzen Einrichtung (Lagerung und Auslieferungslager).” 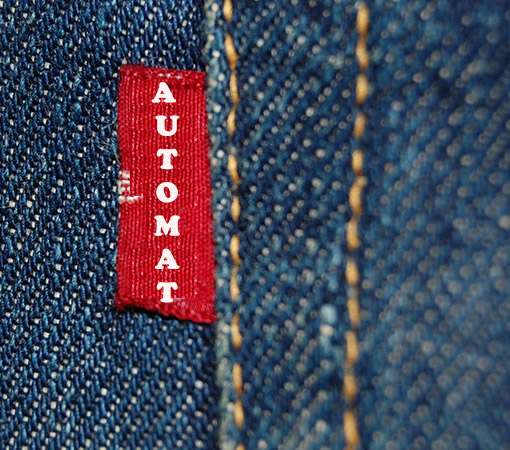 However, this is only if I remember to grab any coins before I’m out the door. Otherwise I’m left to fend for myself, armed with massive multicolored Monopoly® money in excessively large denominations. 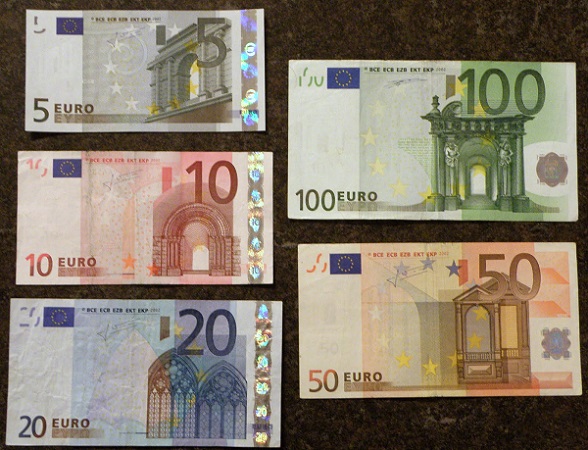 If you look closely at the image above, you’ll notice that Euro bills are of different sizes for the different denominations. Without checking actual dimensions, and just gauging by feel, the €10 bill is the closest size to a US-Dollar bill, immediately followed by the €20 bill. The €5 is a little smaller, the €50, €100, €200, and €500 bills get progressively larger in size. There’s logic to this; larger amounts are physically bigger, making them easily identifiable in one’s wallet. This is no strange thing; a lot of currencies worldwide use currency dimension scaling.

Except if you’re US-American. Any bill over €20 awkwardly stuck out the opening of my first wallet (high roller); they were simply too tall. I promptly switched to the second American style wallet which I packed with me, but because of different widths, some of the bills become awkwardly folded into imperfect thirds, curling around the edges. Organizationally, I just can’t win; the smaller €5 bills get lost in the sea of preschool paper. No joke; I just found a €5 folded up in a corner of the cash pocket while writing this post.

Finding that €5 bill brought joy to my life. I’ve found that the €5 denomination (~$7) is the perfect size, as in amount, for day to day life. Unfortunately, I haven’t come across many, as the ATMs deal in a mixture of €100, €50, €20, and €10. The €10 bill is my next favorite, mostly for it’s familiar physical size, but I’m unfortunately all out of them. My beef with Euro cash begins here; after the €10 bill, my small hands find the bill dimensions awkward. My preference for United States Dollar cash dimensions is reminiscent of Apple’s 2012 marketing for their “taller, but not wider” iPhone 5, which fit comfortably in one hand.

Enough of this. I loaded my pockets with all of the €0.20 and €0.50 coins from my nifty Foul Bachelor Frog (about) plastic cup coin organization system. The horde of five and ten cent coins will wait for another day.

I walked out the door, marching towards the Schleiden Innenstadt in my quest to free myself of my metric ton of coin. I ran a few errands, picking up some last things before Christmas.  I’m not short on money (thanks Mom, Dad), but frugal me said “Nein, danke” to the 10 cent plastic bag being offered at the check-out. My coat has pockets, I thought, and it isn’t too much to carry.

I popped into the small grocery store afterwards. I had just enough change to complete my purchase and rid myself from these alloys. I approached the counter, one hand full of my previous purchases, the other overflowing with Nordic Gold. Scheiße, I should have bought that bag.

So how much do I have, exactly? I fumble around like an idiot. Staring at my palm, and nearly spilling the coins, I carefully turn each one over so that I can see its face and read the number. Still ein Auslander in the EU, I can’t easily tell the difference between a 10 cent and a 20 cent coin, or a 20 cent and a 50 cent coin. I try to justify my incompetence by noting that they’re all Nordic Gold colored, but Quarters, Dimes, and Nickels are all silver. The only thing left in my defense is that they’re all similar sizes (every German right now: Doch!). At this point I can feel the kind gentleman in line behind my burning holes in my back with his eyes, and the last person in line peering to the front, confused about the holdup. 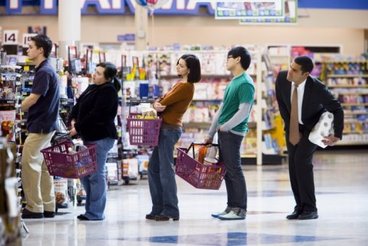 Guess who’s short 60 cents? My plan to rid myself of the coins was rapidly backfiring. I dug deeper into the Hosentasche Automat of mine, a difficult feat with one hand full of the previous purchase, and the other holding some change. The burning feeling in my back intensified, so I carefully placed my other items at my feet, ensuring I wouldn’t cause further embarrassment to myself by dropping Erebor’s treasure. My hand slid past the bazillion packages of pocket tissues in my jacket, and fished out the remaining 60 cents. Exact change.

This currency system works for around 500 million people, 7.3% of the world’s population. I can’t bash it, at least not too much. Ultimately, preferences are determined by to what one is accustomed. What I can do, though, is write plenty about the topic, and it is interesting to see that other US-Americans share the same observations. The author of blog Jack Sh*t, Gettin’ Fit, from whom I sampled the Euro cash image from, has made similar remarks to mine. Read Jack Sh*t, Gettin’ Fit here.