A few days ago, I was in Aachen with my host brother while my host dad attended a meeting. I found this postcard at a small trinket shop, and it certainly spoke to me.

From my understanding of German, nachgetreten is a type of soccer foul.

Roughly translated, it comes out as “after kick,” or being kicked when you’re down/the play is over/etc. Leo.org has a nice discussion regarding its meaning. 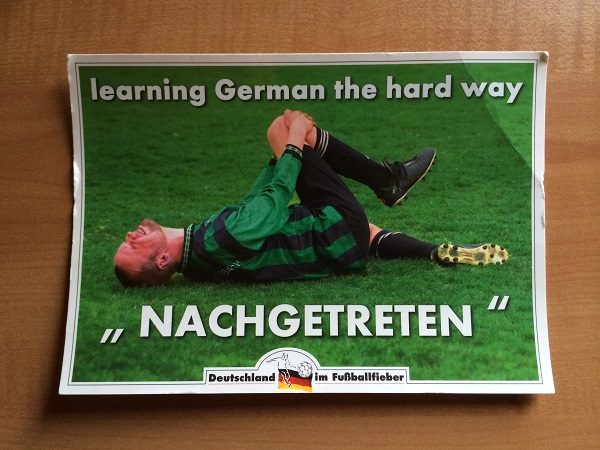 Regardless of its exact translation, this adds some imagery to how I often feel while learning German.

Honestly, I only jest; I’m certainly not complaining about learning German, but I just love the humor. It actually reminds me of an excerpt from a great little book which I’ve read this past week. Adam Fletcher, author of How to be German in 50 Easy Steps, writes,

Every nation has done things it should be embarrassed about. Dark acts in its history. The Germans are no exception. You know of what I talk – the German language. Deutsch is mostly an incomprehensible jumble of exceptions. A dungeon designed to trap foreigners and hold them hostage, repeatedly flogging them with impenetrable and largely useless grammatical devices, whose only merit is to very, very, explicitly state who has what and what is being done to whom, by whom.

The bad news is that for you to fully blend with the Germans, you’ll need to learn it. In principle, it’s not that hard. It works in two stages. Learning words and learning the grammar. Learning words is fun, most are even similar to English thanks to our shared ancestry, you’ll zip along making great progress and really enjoying wrapping your tongue around such delights as Schwangerschaftsverhütungsmittel, Weltschmerz and Zeitgeist.

Then, confident at all the little snippets you’ve already accumulated, you’ll start learning the grammar, the putty that builds your mutterings into real, coherent German sentences. This is where you’ll start to feel cheated. German grammar is impenetrable nonsense.

English, at least linguistically, has always been the biggest slut in the room. Giving and taking from other languages. Trying to make you like it. Keeping it simple. My pet theory is that the Germans, despite their committed efforts, were not as successful as the English in their world power plays and so the English language has always, historically, been forced like a bridge made of glue to ford whatever cultural divide lay between us and whoever we were conquering (sorry, [I mean] colonising). Over time, we’ve had to smooth down the rougher edges of English, which is a poetic way of saying, kick out all the hard bits.

It was forced to evolve in a way that German had not been. German retained the grammatical complexity of Old English.

Take genders as an example, present in Old English, still present in German, yet assigned utterly arbitrarily. Sure, there are some sort of vague guidelines about how words end or that almost everything to do with time is der. That’ll help you with maybe 30 per cent of nouns. That still leaves 70 per cent that you’ll have to learn by heart so you can decline correctly.

You’ll waste so much time memorising genders (PRO TIP: never learn a noun without its article, going back later and adding them in is very time consuming and inefficient). Yet, without knowing the gender of the noun, you can’t accurately decline the endings of the sentences, nouns and adjectives or adverbs. Which is utterly pointless anyway, and does next to nothing to increase comprehension but without it you’ll say very embarrassing things like einer grosser Wasser, instead of ein grosses Wasser. I know, cringe worthy.

Of course there are far harder languages to learn than German, that’s not my point. English also has its stupidities, like a staunch commitment to being unphonetic. The difference is that English was kind enough to be easy in the beginning, it ramps up slowly and encouragingly. German just plonks you down in front of a steep mountain, says “viel spass” and walks off as you begin your slow ascent.

When I first started learning the language, which mostly consisted of me getting nowhere and just sitting around bitching about it, I was gently reminded by a friend that some of the smartest things ever written were written in this language. First you need only respect it, later you can learn to like it.

I must keep that attitude when learning this different language. After all, I’ve got a mountain to climb.