I spent the last weekend with my host family in two exciting new cities. On Friday after school, my host siblings and I took a train from Kall (the next village over, where the nearest train station is located) to Köln, and then on to Düsseldorf, where my eldest host sister lives and studies. That night, I watched a movie at a movie theater and walked around the longest bar in the world with my host brother and two host sisters.

Saturday morning started off with an awesome European breakfast in the cutest cupcake shop ever. I was asked to not take pictures, so I’ll leave you to your imagination. The remainder of the day was spent walking around Düsseldorf and doing a little shopping (new shoes!). Based on the few parts that I saw, Düsseldorf actually reminded me of Warsaw!

We spent a little time in a store known as Peek & Cloppenburg. Envision a mall with 5 floors, each one having an open layout where stores are not separated by walls. This design is brilliant; stores seamlessly connect, allowing customers to unknowingly flow between each major brand. Of course, I imagine that this also increases sales compared to the isolated store floor plan. Ignoring the dark side of this marketing technique, this type of mall shopping was a unique experience.

Sunday was spent in the nearest city to Schleiden, known as Aachen. It is here where my host parents were born and raised. On exhibit in Aachen was “Places of Power”, a great exhibit about Charlemagne.

I never realized the significance of Charlemagne and his influence and importance in European (and global!) history. Charlemagne is responsible for bringing a degree of order and organization to chaotic Medieval Central Europe. He’s almost a likable guy; Charlemagne had a vision to restore Europe to its former Roman glory, and so he did whatever he could to gather the knowledge and culture which had been lost since the fall of the Western Roman Empire. Despite leading Christianization campaigns which resulted in mass death, Charlemagne collected what would have been then heretical works, and, instead of burning said books, fostered theological discussions. The Liberal Arts were heavily promoted as an educational model, and Charlemagne spearheaded reform throughout his empire.

A few weeks ago, I noticed that many European chapels and books displayed in museums originated around 800 CE. I didn’t make the connection that this explosion of literary work was probably a result of the Carolingian Renaissance until last weekend.

Of course, he also was responsible for mass death, violence, and conquest throughout Europe, but on the whole, I think that he was a revolutionarily beneficial leader.

At the end of the day, I peeked inside the Aachen Cathedral. Unfortunately, my pictures didn’t come out nicely, so have a look on good ol’ Google! The interior is mindblowing, as well. 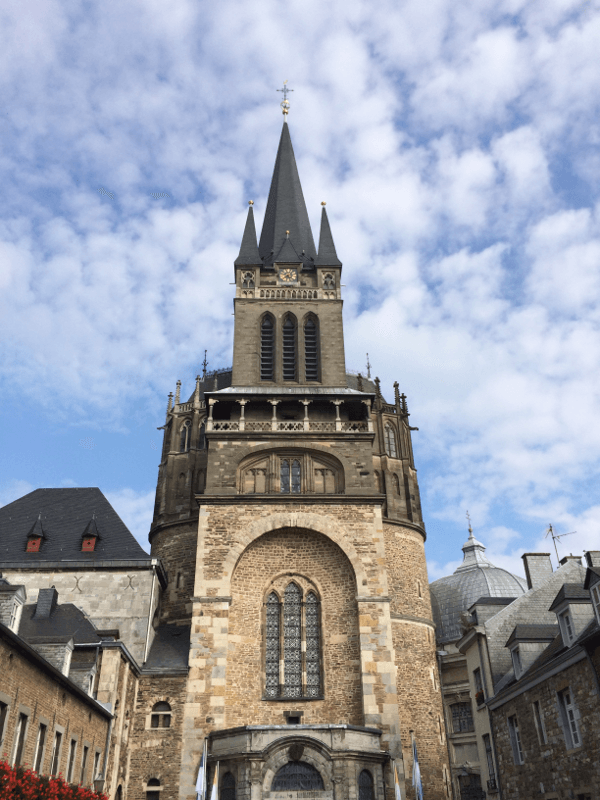