Counting down the days. As of writing this, I’m just 16 days out.

Over the weekend, I attended YFU’s National Pre-Departure Orientation in Chicago with 97 other YFU exchange students. Roughly 50 were headed to Germany, and the remainder were traveling the world over — Argentina, Belgium, Chile, Denmark, Ecuador, France, Italy, Japan, Korea, Netherlands, Spain, Sweeden, Switzerland, etc.

Forgetting about the time change from Eastern (GMT -5:00) to Central (GMT -6:00), I arrived a little over an hour early. This, of course, gave the YFU volunteers plenty of time to…welcome me into the community.

After being escorted into the dorm lobby (we were staying at a small college west of Chicago) by kind YFU alumni who spoke to me only in German, I was greeted by an enthusiastic group of YFU volunteers. As I was trying to get my bearings about me, I was quickly overwhelmed with overtly enthusiastic (and likely, previously bored) YFU volunteers who, with limited restraint, shouted at me in a variety of languages. I was bombarded with German, Japanese, and Italian as I tried to check in at the registration desk. I was then handed a folder with schedules and other logistical information, but more interestingly, a Crayola red, dollar-store, plastic bucket. At the bottom of the bucket were pebbles.

I scratched my head in confusion. Suddenly, I was surrounded by YFU volunteers shouting  “Nee Nee Nee Nee Nee Nee”, and they shoveled a scoopful of new pebbles into my bucket. Dismayed, I looked at my fellow peers, the three or four who had arrived before I did. They shared the look of confusion and fright, for they, too, were being accosted with different languages and had buckets slightly more full than mine. I made my way over to them, and asked if they understood what was going on. Again, I heard the predators’ call, Nee Nee Nee Nee Nee, and received another scoop.

What have I gotten myself into?

After struggling for about 10 minutes, I figured out a number of actions which resulted in receiving the rocks;

Wow, this was starting to feel like a hazing! My bucket was filling up fast. At this point there were new arrivals in the lobby, just now receiving their folder and bucket. I came to a crossroads; should I share my knowledge with them, or watch them suffer as they underwent the language/bucket combination that I had been experiencing for the past half-hour? I preferred the latter, justifying my sadistic decision by telling myself that they, too, needed to learn from experience. Suddenly I felt old and wise.

A meaning behind everything

The bucket carrying and pebble dealing continued throughout the duration of the weekend. Thankfully, the rules gradually were less and less enforced, but enough time had been allowed for the metaphor to stick. Like all the activities we did over the weekend, the bucket was an abstract exercise which prepared us for our upcoming experiences. The bucket, I concluded, was representative of cultural baggage, which we would carry with us throughout the foreign exchange experience. We were “punished” with rocks when we acted against the unspoken rules, otherwise known as “cultural no’s”. It was an exercise in adaptability — how quickly could one figure out the rules, under pressure of being enthusiastically talked to in foreign languages, while trying to complete the day to day task of filling out registration paper work and settling in for the weekend?

Of course, the buckets became the joke among the students during orientation. In desperation, some began the think that the rocks were a reward, and did everything in their power to obtain more. I myself found that I grew close to bucket, reminiscent of a companion cube, and found that I was slightly saddened when it was time to turn in the buckets. That cheap red molded plastic cylinder and I had been through a lot together.

Over the course of the weekend I attended numerous alumni panels and information sessions regarding school, packing, visas, etc. The majority of my time was spent with Team Pink, one of the eight groups that the orientation population was divided into. Eleven other students (10 to Germany, one to Switzerland) were in my group, along with two YFU teachers. The majority of the students were CBYX scholarship recipients, like myself, and to my delight, three others were graduated high school students. It was comforting to meet students who had also chosen the adventure of a gap year and studying abroad. Team Pink’s teaching staff was comprised of two former exchange students. The first was a jolly marketing executive from New York City, who shared an uncanny resemblance to Drew Carey. He had gone on exchange to French speaking Belgium a little under three decades ago. Our Alumna Assistant was a 19 year old girl who was about to begin her Freshman year of college. She had spent a summer in Japan, a year in Germany, and the past semester as an au pair in Spain. Under their direction, we had (very informal) discussions about the exchange experience and conducted those typical silly “team building”  and communication-orientated activities. Again, everything we did had some sort of purpose, revealing the types of experiences and difficulties that we would encounter while on program.

I left the PDO absolutely beaming. I had so much fun! The PDO worked up my anticipation and made me ever more excited. I met absolutely awesome people, the YFU staff/alumni were super friendly and so excited to share their experiences, and it was very refreshing to be around a group of enthusiastic students who wanted to do what they were doing. Of course, the 21st century phenomenon of the great exchange of phone numbers and Facebook information took place at the end, and I’ve been in contact with the friends I made at orientation ever since. 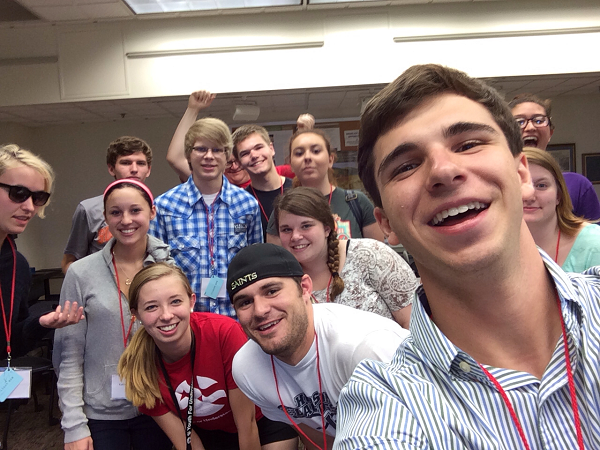